News Stories from All News/Archive - Newsroom

Download from the Apple App Store for iPhone and iPad, and the Google Play Store for Android.

‌The SVSU mobile app is now available from the Apple App Store (for iPhone and iPad) and the Google Play Store (for Android). Search for ‘SVSU’ and install it now. The FREE app provides important information right at your fingertips:

The SVSU app requires your SVSU username/password to access your student information (courses, grades & notifications), as well as the directory.

There is a new way to access your M-drive from the Internet. We have replaced the Netstorage product with 'Web File Manager' accessible from the quick links and directly at vdrive.svsu.edu. It has many new features and a better interface.

Swanson said she expects 2,000 members to attend the convention from Dec. 27-30 at the Hyatt Regency O’Hare in Chicago. The group assembles every two years.

“I was literally jumping for joy,” the communication major said upon learning of her appointment via email last month.

“Words cannot describe how insanely excited and fortunate I feel as I embark on this new journey. I cannot wait to plan a spectacular convention, meet brothers from across the country and represent Alpha Delta Upsilon (SVSU’s chapter).”

Over the next 12 months, Swanson’s duties will include developing a theme and logo for the conference, recruiting membership involvement, developing the program lineup and serving as spokesperson for the event.

The convention goals include conducting business for the fraternity, educating members via workshops and celebrating the group’s successes, she said.

Swanson, a Grayling native, said pledging for SVSU’s chapter “is the best decision I’ve ever made.”

The local group in recent months has volunteered its help at the Saginaw Children’s Zoo at Celebration Square, helped organize several community BINGO games at local assembly halls and sent greeting cards that troops overseas could fill out and mail to family and friends. The fraternity plans to meet this month to determine this semester’s service project goals, Swanson said.

What do you know about internet safety?

Learn about how to keep yourself safe on the internet.

is our new landing page for information about how you can be more aware about the various ways methods you can become vulnerable to a security breach, personal identity theft, virus/malware infections, and other attacks to compromise your way of life.

Adobe Software users may be affected by a security breach at the company.

In October, Adobe suffered a serious data breach that exposed all of their registered user accounts. Anyone who has ever purchased or registered their Adobe software, or signed up for announcements, has been exposed and will potentially be targeted for attacks.

In this message, we want to communicate major action points for those who may have become vulnerable due to this breach:

Cryptovirus, aka CryptoLocker, and How it May Affect You

This message pertains to recent news stories on various cable networks, including our local WNEM TV 5 reporting about Cryptovirus (aka CryptoLocker). The reports are about a serious and nasty variation of other past ransomware viruses like FBI CyberCrime and Homeland Security.  Watch this video for some insider technical information about how this virus works, from Sophos.

This latest variation informs you that your system files have been locked (encrypted) and you must pay $300 with X amount of time to get the key to unlock/decrypt your machine (or risk losing the key forever). And it actually does encrypt your files (see news articles below for a list of common files). Of course, there is no way you can trust them to provide you the key (after you give them your account information and money).

This infection is typically spread through emails sent to company email addresses that pretend to be customer support related issues from FedEx, UPS, DHS, etc. These emails would contain a zip attachment that when opened would infect the computer. These zip files contain executables that are disguised as PDF files as they have a PDF icon and are typically named something like FORM_101513.exe or FORM_101513.pdf.exe. Since Microsoft does not show extensions by default, they look like normal PDF files and people open them.

The only way to ensure you do not lose your files is to:

The recent Walmart Email is just one example of the Blackhole Exploit - read more here:

The purpose of this message is to inform you of a new sophisticated Virus infected message, that does not require you to click on links - simply load the message into a "dated" web browser (like Firefox, IE, Chrome, Safari) and it searches for exploits on your computer.
If your system had AVG popup as you viewed it, and it blocked the message - great! That means AVG stopped its actions cold.  If it did not, we should have your system inspected.  Please contact the IT Support Center at x4225.
Below is a sample message. The circled areas are items you should scrutinize before acting on messages.
Again, being aware of these kinds of nuances in messages will help further protect you.   Be careful and assume that the message is not legitimate.  Ask yourself basic questions.
If you are concerned, your next best course of action is to go directly to the website and log in normal and/or contact their Customer Service via phone (never click on links in these messages to get there).
And as always, please feel free to contact the IT Support Center (989-964-4225) for advice or to report something that is phishy. If you accidentally clicked and became a victim, you should change your passwords immediately and contact the IT Support Center to have your system inspected. 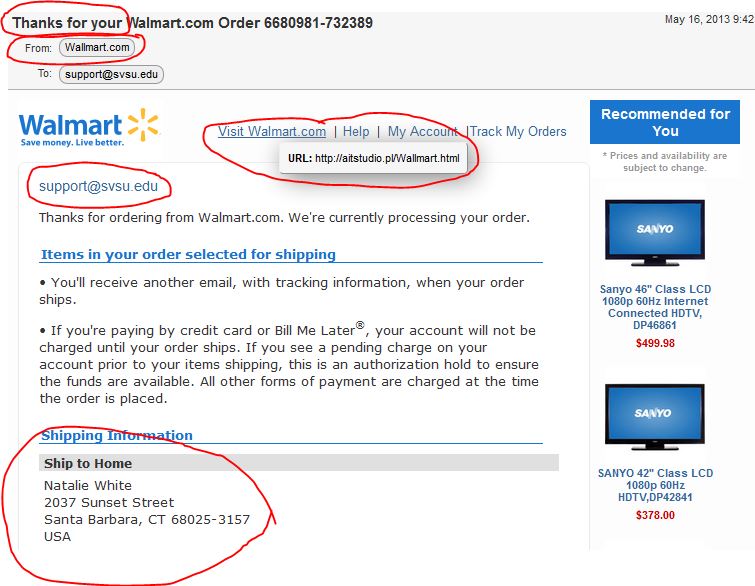 The members of the Brain Research Lab at Saginaw Valley State University traveled to New Orleans, La for the 42nd Annual Meeting of the Society for Neuroscience (http://www.sfn.org). While there the students were able to meet with and learn about neuroscience from experts from around the world. In addition, the students presented (5 posters) the research they worked on over the summer at the annual Faculty for Undergraduate Neuroscience (http://www.funfaculty.org).