The saying “all politics is local” has taken on deeper meaning for four Saginaw Valley State University alumni. Since 2017, they have served their respective communities as members of their local city councils.

While none of the four set out to enter public service, when they saw a need, they stepped up.  Notably, all are under the age of 50, and they represent a growing number of SVSU alumni who use lessons learned during college to engage as public servants.

Ron Bacon is a two-time graduate of SVSU, having earned his B.A. in criminal justice in 1996 and his M.A. in organizational leadership and administration in 2002. He works for Genentech, a Roche company, as a therapeutic area manager. Bacon was appointed to a council seat for the City of East Lansing in August of 2020, then elected mayor in November 2021. He is the first person of color to serve as mayor in the city’s 114 year history.

George Copeland and Michael Flores both were elected to the Saginaw City Council in November of 2020, adding younger voices to the council.

Copeland, who serves as SVSU’s public school academy transition coordinator, graduated in 2016 with a B.B.A. in management and is currently pursuing an MBA at the university.

Flores earned a bachelor’s in political science in 2019. He is a union representative and second chair of negotiations for SEIU Healthcare of Michigan.

Rachelle Hilliker has been the commissioner for Bay City’s 5th ward since 2017 and works as a strategy manager for Michigan College Access Network. She graduated from SVSU in 2013 with a bachelor’s in political science and sociology and earned a master’s degree from Central Michigan University.

For all four, SVSU provided opportunities for personal growth as well as academic advancement, preparing them for success in their professional lives and in their elected roles.

“Small, incremental things got me into the process,” Ron Bacon said about his entry into public service, “then we had openings on city council.”

When individuals approached him about joining the council, Bacon agreed.

“It’s time for people from different walks of life to get in there (government). We have a lot of career politicians. I argue that I’m not a politician. I don’t think at the speed of government. I don’t like things to languish in committees or commissions. Let’s move them forward.”

Bacon is accustomed to moving things forward. From his days playing football at SVSU to advancing his education to shifting his career focus, he has embraced change, stepped up to the challenge and looked to the future.

“Visiting schools, I felt like SVSU was small enough that I could succeed. I wasn’t prepared for the rigor of college, but there was a lot of support to help me succeed.”

“Coach Jerry Kill would ask players to lead. He taught me that if I want to be a leader, I need to do things I might not be great at.

“Nothing good happens in the comfort zone. If you don’t adapt to change and can’t change on the fly, you might not be effective.”

After he earned his B.A., he worked in the juvenile court system. He chose to pursue his master’s degree at SVSU because he was able to work full-time while attending classes. About 25 years ago, he made a shift to the biotechnology industry, joining Genentech. He also serves as the assistant varsity football coach for East Lansing High School, fulfilling a passion for coaching and mentoring.

Bacon said lessons he learned at SVSU – including time management, commitment, critical thinking -- have carried him through his career.

“SVSU taught me how to be a thinker. Helped me become a better student. How to debate, how to take new information, break it down and disseminate it in a different way. You’re never not a student.”

Considering his position on city council and role as East Lansing’s first Black mayor, Bacon recognizes his responsibility and encourages others to answer the call as well.

“I hope I’m an inspiration. I have a responsibility to do well. If you’re going to open that door and go through it first, you need to make sure you leave it open.

“I tell the young people that this is a young person’s game and it’s up to them to shape the future. I’ll hold this space, but I really hold it for the next generation, the people coming out of college and high school. That’s who’s really going to lead in the future.”

A family tradition of service

George Copeland never thought of running for a seat on Saginaw’s city council until he noticed a lot of millennials getting involved in county elections.

“I’m a homeowner, I have children and I’m part of the community. We have to make sure our representation looks like our voice.”

Copeland is no stranger to public service. His grandparents and great grandparents were pastors, and community involvement was part of the fabric of his family.

“I grew up in the church. The question was always ‘How can you serve the community.’”

Copeland carried that spirit of community involvement to SVSU, where he joined a number of organizations, including Forever Red, Valley Voices (gospel group) and Delta Sigma Pi. He also worked as a campus advisor, resident advisor and intern in the SVSU Foundation. These and other opportunities at SVSU helped Copeland understand and embrace his leadership abilities.

Copeland now draws on his SVSU experiences in his role as the public school academy transition coordinator at the university.

“Through these organizations and through my education, I learned a lot about building and nurturing relationships. That’s an important skill both in my work with SVSU and in my city council role. And I’m able to share my knowledge and my resources to help students learn how to build relationships of their own.”

Copeland sees his city council service as an opportunity to help others while achieving personal growth. He believes in teamwork and in planting seeds of opportunity for others, and he wants to use his platform to make Saginaw better for those around him.

“With so much negativity around, someone has to be the voice of hope. I want to give people hope. I want people to flourish and grow, not just survive.” 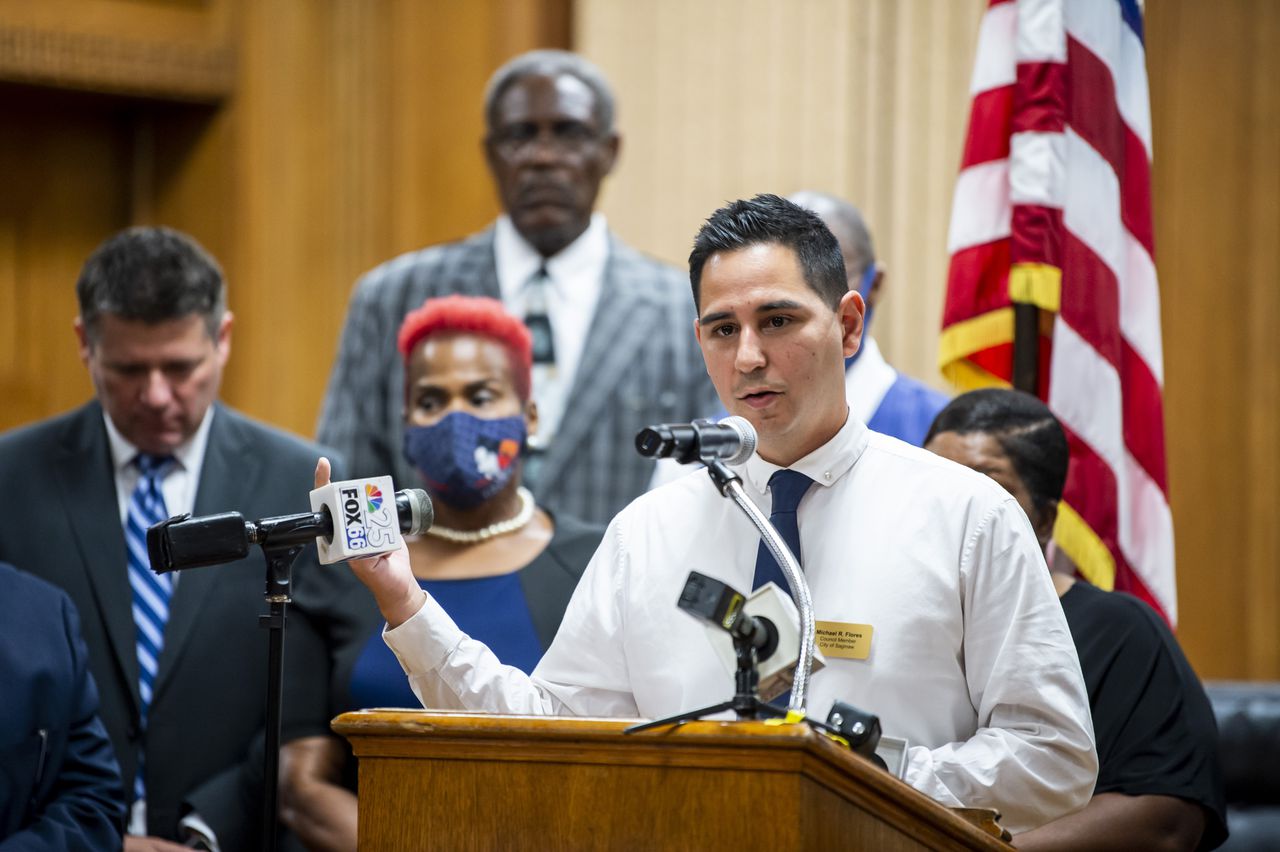 Heart was in the right place

Public service wasn’t the end game for Flores, but it grew from his desire to help others.

“Now more than ever, people need assistance, and they need some guidance at times. More than anything, they need to feel like they have a voice.”

Even though Flores studied political science at SVSU, he said he’d wanted to be a director or screenwriter in the film industry. In fact, he wrote the screenplay for “Detroit Diamond,” a short film about a young mother addicted to heroin that made its world premiere at the Cleveland International Film Festival in 2018.

“I wanted to get into something where I could be behind the scenes,” Flores said. “I want to use my creativity to help other people. I use my own experiences to shine a light on things that weren’t being talked about.”

Flores came to his seat on Saginaw City Council with some political experience. During his first semester at SVSU, he was appointed to serve on SVSU’s Student Association, the student government body. He later completed an internship with Congressman Dan Kildee’s office and worked on Suneel Gupta’s campaign for a seat in the U.S. House to represent Michigan’s 11th Congressional District.

These experiences helped Flores understand what it means to be a public servant.

“I learned how to use power to help constituents,” he said.

Like Copeland, Flores was elected to Saginaw City Council in November 2020, while the COVID-19 pandemic was still limiting activity in the region. Flores said he conducted his campaign primarily through word of mouth.

“Working on campaigns, I had always wondered what a nontraditional campaign would look like – a campaign without a campaign manager, a campaign without yard signs, a campaign that’s mainly word of mouth. My heart was in the right place when it came down to the issues, and I wanted to see if that translated into people wanting me to represent them.”

“Nontraditional” also describes Flores as a student at SVSU. While attending the university, he had to balance his full-time academics and part-time work with fatherhood. That experience, Flores said, helped him develop the habit of working hard. “When it comes to the real world, that’s invaluable.”

And he said the staff were always “incredibly supportive.”

“They take students under their wing and walk them through challenges.”

Flores recognizes that communities – including Saginaw – face many challenges. He said he serves so his son will have a future in Saginaw.

“As a kid, I was told I’d need to go someplace else for work. We need to change that mindset, keep young people here and give them good jobs if Saginaw is going to get to the next level.”

Like Bacon and Copeland, Flores sees a need to diversify our public offices, especially at the local level.

“All politics is personal. In local government, you have to work very hard to make an impact. My main hope is that I can inspire someone else who may not have thought of running, to run.”

A part of the change

Rachelle Hilliker found her way to public office by understanding her community and the systems that support it.

“Well, 2017 was the first time I was elected,” Hilliker said. “I was working for the YWCA Great Lakes Bay Region at the time, doing a lot of advocacy around equity, around school push-out and around income equality. And it was just very clear, after talking with people, as much advocacy as you try to do, if you want to make that kind of change, you have to be part of the system.”

As a legacy student at SVSU ― her mother earned a degree in social work from SVSU ― Hilliker quickly became involved with on-campus activities that would open the door to her future career. Through programs like Model U.N., College Democrats and Phi Sigma Alpha, the national criminal justice honor society, Hilliker became familiar with organizational approaches to political involvement. Through her classes, she learned what it takes to make an impact.

“While I was studying sociology, I was looking at systems and systems-level change and really gained the perspective that if you want to really make a difference, the political system is a great place to do that work.”

Hilliker’s career experiences ultimately aligned. Her knowledge of the political system alongside first-hand experience working with the individuals she serves have allowed Hilliker to work from multiple angles to address public issues as a Bay City commissioner.

Hilliker plans to run for re-election this year and will remain active in Bay City.

“I really love my community,” Hilliker said, “I love Bay City. I want to make it a better place. I knew this was going to be where I wanted to live and work, so the best way to do that was to really get engaged.”

“Sometimes, individuals might think that you shouldn’t be at that table and you’ll definitely get that pushback, but if you want to make a difference, then definitely stay involved, stay persistent, because it does make a difference to have young people’s voices at the table.”

SVSU has a tradition of inspiring servant leaders, creating an atmosphere where people feel accepted, supported and empowered so they can create positive change in their professions and their communities. Ron Bacon, George Copeland, Michael Flores and Rachelle Hilliker are doing just that.