“I can be at a teaching school AND do research full speed – I don’t have to leave any interests behind.” 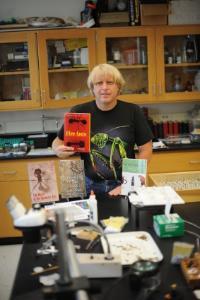 A plant louse, a long-lipped beetle, a white fly and a harvester ant all have one thing in common: They are four new insect species and all of them were discovered by Steve Taber, SVSU assistant professor of biology.

Taber admits to being preoccupied with insects, but he does not make apologies for his passion. Instead, he questions why anyone would spend any significant time doing anything but what they love to do. And so Steve studies insects. He catches them, reviews them, catalogues them, compares them, photographs them, and sometimes, makes discoveries. The process that leads to a new species discovery takes about a year, from beginning until a journalistic publication. And as Steve is quick to point out, nothing is known in science until it is published.

During the summer months, you can daily find Steve roaming the campus, catching net in tow, or driving each weekend to Ludington to engage in a habitat study of wetlands, marshes and swamps. His book, Fire Ants, brought him close to a momentary commercial fame when he was contacted about its use in the season’s finale of the popular crime show, “CSI.”

It is the active combination of research and teaching that has made Steve’s SVSU experience such a positive one. The fact that he does both on a campus that is as conscientious about its appearance (classrooms and labs) as it is its credentials turns out, for Steve, to be the proverbial “icing on the cake.” Usually relegated to dark basement offices, this biology professor loves what he is doing and where he is doing it.